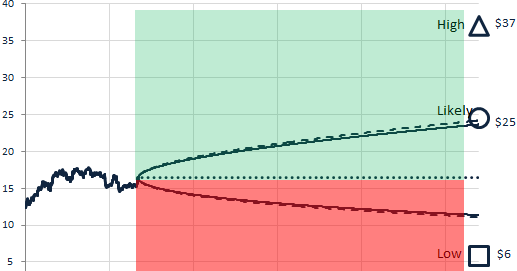 Summary
We have made a small stock investment in the shares of Ford F on the basis of the analysis we performed for the recently-published IOI Tear Sheet on the company.

The revenue picture for Ford is not compelling?Ford?s main market in the US is saturated and its target consumers are stretched. However, the potential for Ford to convert a higher proportion of its revenues to profits is good, and this potential gives rise to valuation scenarios significantly higher than the present market price.

The combination of revenue variability and a high degree of operating leverage mean that the valuation range for Ford is wide. In addition, there is a material chance that the economic picture at Ford will take some time to clear up. As such, rather than layer options-based investment leverage on top of Ford?s operational and financial leverage, we plan to make this investment in the common stock of the firm.

For more information regarding Ford?s business and valuation, please see the detailed YCharts Focus Report I authored as YCharts’ Director of Research. You must register to read the report, but it is free to download, and please feel free to pass it on to friends and colleagues.

Willingness to make purchases has waned since around 1990, when the US market saturated (at roughly 2 cars per household and 1.3 per licensed driver). Replacement demand has also waned, partly because of issues of ability (discussed below), but partly because improved engineering and manufacturing has allowed car owner to drive the same car for longer.

Demographic changes are open to a bullish or bearish interpretation. There are more people now than at the turn of the century of an age at which people usually begin starting families and moving to the suburbs. However, there is also an increasing trend toward lower interest in and usage of automobiles among this same group.

The short story about willingness is that household formation and replacement demand may spur increased demand, but our valuation does not rely on a these trends.

With Americans of questionable willingness and without the ability to buy Ford?s products, our valuation does not make any heroic assumptions regarding revenue growth.

Graphically, Ford?s historical revenue growth rates, along with our best- and worst-case assumptions appear as follows:

Note that I am using a new measure to measure growth. This is the year-over-year change in five-year rolling aggregate revenues calculated in the following way:

This gives a percentage change number that is less noisy than a simple year-over-year growth number, and is not as sensitive to low or high start values as the compound annual growth rates (CAGR).

The full story is a bit more complex, but this is the essence of operational leverage. (For those who would like a more complete explanation, please see the first article in my four-piece series on leverage, which you can find among the IOI Archives.)

Leverage is a double-edged sword. When demand is strong and revenue levels are high, leverage provide a huge boost; when economic times are bad, leverage can be extremely destructive.

The full story behind Ford?s profits is spelled out in greater detail in the above-referenced YCharts research report. In short, Ford built more productive capacity even as the car market saturated in the late 1980s; so much so that its productive capacity overshot consumer demand for automobiles.

In order to keep its productive capacity more fully utilized even after the US car market was thoroughly saturated (during the 2000s), it provided generous credit terms and ?incentive deals? to encourage consumers to buy cars they really did not need.

The incentive deals cut into Ford?s profitability, as did the inefficiencies born out of too much manufacturing capacity.

IOI?s position in Ford is essentially based on the premise that, now that Ford has made good progress in rationalizing its productive capacity, it will be able to translate more of its revenues into profits for its owners.

Investment Levels and Effica
cy
I have graphs detailing Ford?s investment levels and efficacy in the YCharts report. Basically, Ford has been quite busy dis-investing over the past few years. This is an appropriate strategy for a company like Ford that has too much productive capacity for an oversaturated market. Our projection calls for the company to spend roughly one-fifth of its OCP on expansionary investment projects.

Valuation and Investment Strategy
Ford?s vast operational leverage means that its valuation uncertainty is very great. The IOI Tear Sheet on Ford shows that using the valuation assumptions mentioned above, we generate a valuation range of $6 / share to $37 / share compared to a recent price in the $16 / share range.

Considering the downside valuation potential, the timing uncertainty, and the fact that an options-based investment strategy would layer investment leverage on top of Ford?s operational leverage, we are hesitant to implement an investment in Ford using options.

On the other hand, considering the significant upside potential in the shares, we would like to be in a position to enjoy a profit if the upside potential is realized in the market. For this reason, we have decided to take a modest position in the common stock of Ford.

We may elect to layer on options positions in Ford in the future, depending on the market price of the stock vis-?-vis its operational performance.